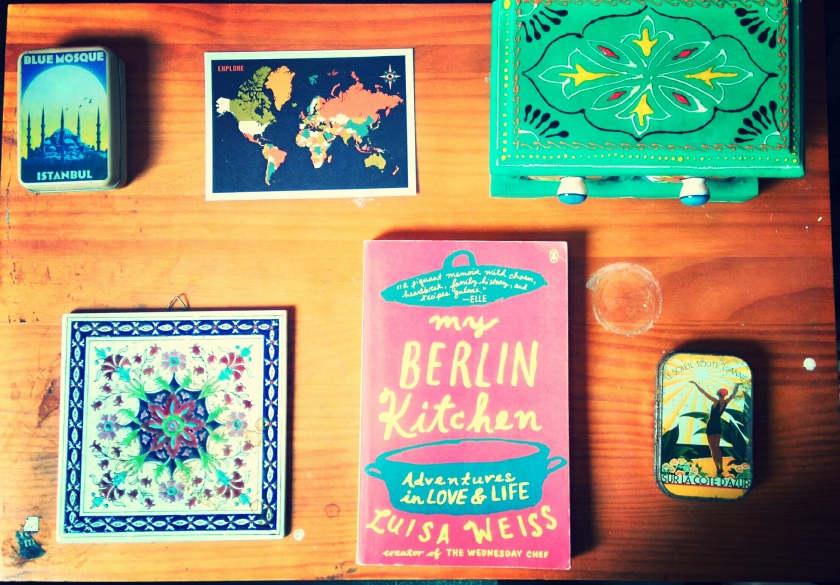 I love food memoirs. I love to read, travel and eat so this literary genre ticks all the boxes for me! I have a constantly growing cookbook collection I’ve been to know to casually read rather than actually cook from- Yotam Ottolenghi’s Jeruselm being a favourite! But a food memoir is a lovely book to curl up and enjoy with a cup of coffee.

Food is never just food. It’s also a way of getting at something else: who we are, who we have been and who we want to be. When we fall in love with a certain dish, I think that’s what we’re often responding to: that something else behind the fork or spoon, the familiar story that food tells.

Food is a great way to learn about another culture and cooking is a great way to tell stories. In fact a cooking class or food tour is one of my favourite things to do when on holidays! But if you can’t jet off right now, curling up with a good foodie book and a big cup of coffee (go on and get a dairy milk too while you’re at it!) is the next best thing!

This isn’t meant to be an exhaustive or definitive list; these books are simply my particular favourites.

So here they are, my top 5 favourite food memoirs!

Mastering the Art of Soviet Cooking: A memoir of Food, Family and Longing

This much anticipated memoir from food writer and critic Anya Von Bremzen is part history, part cookbook. Von Bremzen uses personal stories to tell a much larger history of the USSR. She and her mother, who landed in Philadelphia in 1974 as stateless refugees, begin to cook their way through the iconic 1939 soviet cookbook ‘Book of Tasty and Healthy Food’, going on a journey through personal and political history. It’s a very personal and accessible story so you don’t need to be a history buff to enjoy!

The Temporary Bride: A memoir of Love and Food in Iran

An unusual story told through food, this book follows the author to Iran where she goes to learn about Persian food but ends up falling for a Yazd man, Vahid, and becoming his ‘temporary wife’. A temporary marriage or nikah mut’ah is an ancient practice in Islam which allows a man and woman to unite for a limiter period of time. It was historically used when men were travelling for long periods of time but in modern times, has seen a small revival as couples use it to get to know each other better before actual marriage, while remaining within the limits of Islamic law.

This story is interesting as the author, Klinic, is not Muslim. The book starts really strong- I love the authors descriptions of her independent childhood and how in her early thirties, she quits the corporate world to run a cooking school from her London flat.  It falls a little flat as it progresses however; Her (mis)adventures as temporary wife can be frustratingly naieve and not very well explained. But Klinic writes well enough about food and travel to make up for it and the story is engaging enough to keep you reading until the last page!

My Berlin Kitchen: A Love Story (with recipes)

I bought this book in Bangkok last year, unaware of the authors wildly successful blog The Wednesday Chef. The book tells of Weiss’s passion for food, beginning with her childhood in Berlin. Born to an Italian mother and American father in the German capital, who subsequently separated, Weiss began a life of criss-crossing the Atlantic and cooking meals to feel closer to whichever parent she was furthest away from. We follow her to adulthood in Paris and New York, through relationships and heartbreak, work, love and always food.

I loved this book, it has a nice balance of discussing food and life. Weiss’ childhood is interesting and her writing engaging. There’s some lovely recipes included at the end of each chapter. The kind of book you should buy and keep to dip in and out of in the future.

Perdutamente; Crazy for Italian Food:  A memoir of family, food and place with recipes

I read this book during a blissful week on a Cambodian beach, in a rustic beach bungalow at a Italian run place. It was a wonderfully strange Italian enclave in southern Cambodia with great coffee, leather-y old Italian men oiling themselves and baking in the sun, chilled prosecco and beautifully fresh piadina- flatbread sandwichese stuffed with meat, vegetables and cheese. I had just finished reading Mastering the Art of Soviet Cooking and was in the mood for another foodie book; I came across this one through Amazons recommendations.

And I loved it! There’s no style or polish on this one; no blogger turned author sheen of cool. It’s a good, old fashioned read which tells the story of a large second generation Italian immigrant family in New York from the 1930s to the 1960s and beyond, travelling back to their time in Italy and jumping forward to their move through several social strata and into the suburbs. There’s lovely personal anecdotes, a sense of humour throughout and recipes at the end of each chapter too. One for pasta and wine lovers!

Julie and Julia: My year of cooking dangerously

Most people are probably familiar with this book or the 2009 film of the same name staring Meryl Streep and Amy Adams. This was the first ‘food memoir’ I ever read, picked up at Heathrow a few years back.

This book also developed from a successful blog (see the pattern emerging here?). Julie Powell is feeling left behind in a dead end job as her friends seemingly race ahead in the success stakes. Supportive husband in tow, Julie sets herself the task of cooking her way through Julia Child’s cookbook in a year; She’s always found cooking comforting and feels the need to both set and complete a task for herself. To keep her on track with her goals, she blogs about her progress.

It’s a great book, particularly for young women. I think it taps into the reason a lot of people get so into cooking. Aside from bringing people together, if other aspects of your life aren’t going particularly well, it’s reassuring to knock together a great meal and feel you can accomplish something. This is a large part of Julies motivation; the need to prove to herself she can achieve a goal she’s set for himself.

Julie’s writing is always honest, even when it doesn’t paint her in  particularly flattering light, which is something I really appreciate. This is a great read, easy but honest and enjoyable. It’s also the reason I first attempted and then mastered bouef bourguignon

Delancey: A man, a woman, a restaurant

Did I miss one of your favourites? Let me know over on my Facebook page!